Did you know that you could be putting yourself at risk of a driving fine with the DVLA right now? 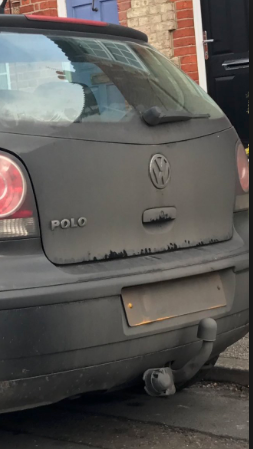 Driving around with a dirty number plate could see you fined up to £1,000 with the DVLA in the UK, regardless of whether this is a personalised number plate or not. People are being warned that the laws are tightening up when it comes to number plates, even the private reg plates are subject to the same rules.  A dirty number plate can obscure the information, and if the data cannot be seen a fine can be issued. The single best way to avoid this type of penalty is to clean your number plates along with the rest of your car.

Sometimes, it's difficult to keep the entire car clean with the changes in the weather - splashing mud during rainy days make it harder to keep the whole vehicle clean, but a damp cloth can wipe down number plates and keep them clean so that they can be seen. There's no law to force any drivers to wash their private number plates, but that doesn't mean that they shouldn't if they want to avoid a fine being issued.  Drivers need to clear their number plates at least every day if they're going to keep their number plates seen!

During the winter, cars are more likely to be dirty as there is more of a prevalence of rain and slushy snow, which gets dirty quickly. Wet dirt flying up against the side of a car can coat the number plates and make them difficult to see through. It's not just the wet, though, the wet conditions with flying grit, sand, mud, and salt from the road make the weather conditions more difficult and the possibility of a dirty car is more significant. The dirt gets revved up by the rear tires and splatters the back of the car - similar to the way that a bicycle does when going through a puddle. All of this filth sticks to a licence plate, making it more likely for you to end up with a fine.

“You can't rearrange letters or numbers, or alter them so that they're hard to read."

Other Ways You Could Be Fined

There are plenty of different ways that you could be risking a fine when you're driving: it's not all number plates! So, Are you breaking the law without even realising it? We've put together a list of the illegal things that you should refrain from doing behind the wheel if you don't want to be seen to be breaking the law.

Using Your Mobile Phone. It's illegal to drive and text and drive and talk on the phone at the same time. Not only does it distract your driving, but you are also risking the lives of other people on the road. A fine would be the least of your worries if you were caught with your phone in your hand and the engine running. Even if you are stopped, you need to make sure that your engine is off before you get your phone out. A running engine assumes driving, so don't be caught doing it.

- Flashing Headlights. Drivers are allowed to flash their headlights to alert others of their presence, but this is the only time that flashing headlights is permitted on the road. Flashing lights otherwise can distract other drivers, sometimes to devastating consequences.

- Throwing Rubbish. Littering out of the window of your car can land you in hot water if you are caught doing so. You have a responsibility to keep the roads clear, and throwing out debris could be damaging to other vehicles and lead you to a fine.

- Smartphone Payments. Paying for a meal at a drive-thru with your smartphone can send you a fine in the post if you are caught - remember the running engine rule?

- Barefoot Driving. It's a myth that you cannot drive without shoes; as long as you have good control of the car, you can drive however you like.

- Sat Nav Check. Checking your satnav is again, legal, but if you are driving your car and you don't look in control of the vehicle, you will be fined.

- Eating While Driving. It's not illegal to eat and drive, but if it's making your driving a safety issue, it could be.

- Smoking. Smoking can land a fine if there are children in the car with you.

- Engine Running. Stationary cars should never be left with a running engine if you don't want to be issued with a fine.

In addition to the £1,000 fine, it is enough of an offence for a car to fail its MOT, so it's always best to be aware of the laws before you get on the road. Previously the DVLA explained the rules  "There is a specific offence under the Vehicle Excise and Registration Act 1994 of obscuring or allowing a registration mark to be not easily distinguishable.

“All registration numbers must be displayed clearly and correctly on the number plate – this helps the police, enforcement agencies and members of the public to correctly identify a vehicle to assist road safety and traffic enforcement."

Legal Requirements of a Number Plate:

- Plates should be made from a reflective material

- It should display black characters on a white background (front plate)

- It should display black characters on a yellow background (rear plate)

- There should be no background pattern

There are also rules of having a number plate on a vehicle, and these include:

- Motorcycles and motor tricycles registered on or after 1 September 2001 must only display a number plate at the rear of the car.

- If you ride a motorbike or motor tricycle registered before 1 September 2001, you can also display a number plate at the front, but you don’t have to.

- Motorcycle and motor tricycle number plate numbers should be on two lines.

- Your trailer must display the same number plate as the car you’re towing it with.

- If you’re towing more than one trailer, the number plate must be fixed to the trailer at the back.

Speeding fines in the UK are doubling to £200 and six penalty points as of April.