The AU1 registration number from the famous James Bond film Goldfinger has been sold by the Cherished Number Plate dealer Primo Registrations.

The number plate AU1 – the chemical symbol for gold - adorned the vintage Rolls Royce of Auric Goldfinger in the famous 1964 film, and is well known to James Bond fans across the world. Goldfinger, the film's villain, used the Rolls Royce to smuggle gold out of the country with his deadly henchman called Oddjob, before attempting to set off a nuclear bomb at Fort Knox.

Of course, 007 saves the day with seconds to spare, this time with the help of Pussy Galore!

Primo Registrations managing director, Peter Johnson (pictured) said: "The AU1 registration is a fantastic number plate for any James Bond fan, but is also a fantastic two-letter, number one registration. With prices starting from £79,999 for similar plates, IY1 being a great example, they not only look great on a vehicle but also have proven to be great investments too. We look forward to seeing what AU1 will be going onto in the future". 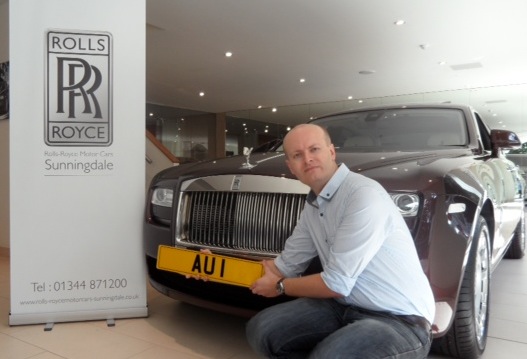 Primo Registrations has sold a number of interesting plates over the years but this is one that is certain to turn heads and not just those of James Bond fans.

Thanks to our friends SuperVettura SuperCars based in Wentworth, Surrey, and Rolls-Royce Sunningdale.